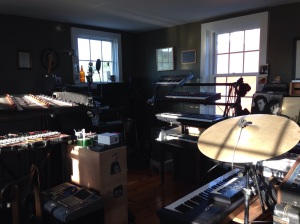 My first foray into non-fiction.  More anecdotal in nature than narrative, it still clocks out at 100 words.

I fault Rochelle for this piece since I’m entering into her territory … and why not?  Let’s do something different, right?  “Of course right,” said the Queen. 😉  She also took the picture.

A musical arranger is like an editor for writers — he makes the greats sound better than they are.  Those composers he arranged for will tell you that.  Sandy wouldn’t.

I have included a link to a very well-produced, thoroughly entertaining and fun video on the man named Sandy.  After reading the story, click on the link.  It’s in four parts you’ll want to see them all (except part 3 is missing due to probable copyright restrictions).

So … you like movies?  Music?  Even if you don’t, you’ll enjoy Sandy himself.

The public knew the great music he arranged for the MGM musicals. They wouldn’t have known Sandy, except maybe seeing his name in the credits.

While collaborating with John Williams on My Fair Lady, he was tapped to compose a score for a new TV series. Styling the theme from a song from his childhood, “Beyond The Blue Horizon,” he finished scoring the series — Star Trek!

“Little did I know when I wrote that first A-flat for the flute that it was going to go down in history somehow.  It’s a very strange feeling.”  – Alexander “Sandy” Courage